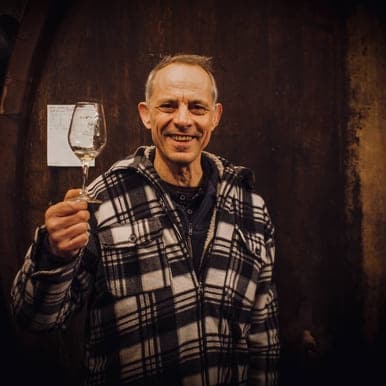 An emblematic estate which has greatly contributed to spreading the culture of biodynamic agriculture and natural wine in Alsace, for 12 generations, the Frick family has taken care of this mythical vineyard located in Pfaffenheim, south of Colmar. Today it is managed by Jean Pierre, Chantal and their son Thomas (did he have the choice of his profession? We cannot guarantee it… 😉 ).

Precursor domain which has inspired many young winegrowers, the entire vineyard was converted to organic farming in 1970 by Pierre and Anette. Then in Biodynamics in 1981 by Jean-Pierre Frick. To increase the vitality of soils, vines and wines. A successful bet!

Since 1999, the frick family has started to vinify cuvées without added sulphites in order to be able to offer the most honest wines possible. In order to express only the vintage and the terroir. Today this rule applies to all Alsatian grape varieties.
For the rest, everything seems obvious when you want to sell good wine…: indigenous yeasts, no added sugars, acidity not corrected… Otherwise, the aging is done on fine lees, in old casks in oak, for a minimum period of six to nine months.

Regarding tasting level, the reputation of Pierre Frick wines is well established… Straight, controlled, elegant, fine, you never get tired of it!